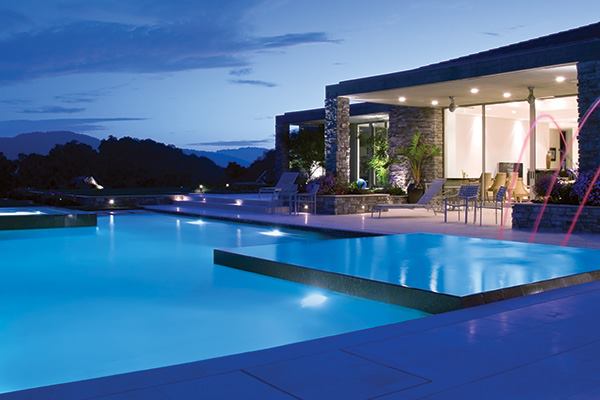 The difficulty with this pool's design is that unlike most projects with one primary vantage point, this one had three — the living room/wet bar, the kitchen/family room and the master bedroom/exercise wing.

Interestingly, if one were to stand at the corner of the pool in the foreground of this image, they would sense that the pool is out of level. Because of the "forced perspective" and the eye's peripheral vision, viewers even pick up the water level at the top of the coping to their right (at their feet), yet to their left, their eye sees 5-6" of freeboard.

The soils report indicated that no specialized foundation would be required, with the exception of a keyway under the vanishing edge. The toughest task was to ensure that the finished elevation of the coping aligned with the existing polished limestone decks and patios.

The pipes had to be routed around the skimmers and between the existing limestone decks. The plumbing for the floor returns was trenched and recessed below the structure, so as to maintain the proper shell thickness — a common mistake a lot of builders make. Note the waterstop flange on the floor return riser. Halfway through the shotcrete process, it was lowered down and topped with cement.

Vanishing edge returns were plumbed into the floor to eliminate turbulence and maintain the glassy surface that makes this feature popular. The manifold, which is fed at each end, is a complete loop to ensure a balanced flow at the various returns. Sumps are utilized to maintain the proper dimensions beneath the drain covers (this was long before the VGBA existed).

Dimensional lumber and plywood was utilized to build sturdy forms. The forms were assembled with screws so that the lumber could be reused on subsequent jobs. Prior to the placement of the steel, the forms were coated with a form release to aid in their removal.

The shotcrete surfaces were later cleaned to remove any form release oil that could interfere with the adherence of waterproofing or finish layers.

The elevated perimeter overflow "splash pad" was floated with a leveling bed of mortar. After curing, it was coated with a waterproof membrane and crack control fabric.

To prevent water wicking and to control efflorescence both sides of the vanishing edge wall were waterproofed. The waterproofing was wrapped onto the spa, throughout the hidden gutters and collection basins. It was then coated with a compatible thinset to provide protection from abrasion and wear.

The thinset also created a surface for areas that were to later receive Pebble Sheen. In the background, the spa has been floated and leveled and is about to receive waterproofing. A shade structure is being erected over the splash pad to protect the glass tile that is to be set in this area.

The elevated perimeter overflow splash pad simply spills over this raised rim. On the deck side, the water flows into this concealed gutter. The gutter returns this water back to the pool at each corner. The elevation of this gutter is slightly above the pool's operating level to ensure that it positively drains. This is one of the biggest mistakes that I observe when people try to mimic this detail — lack of gutter waterproofing, lack of any finish at the ends (where bathers can look into the gutter) and not paying attention to the critical elevations. This gutter simply would not drain if it were at or below the pool's water level.

The brown granite was bull nosed, so that the co-efficient of friction over the lip was minimized. It also reduced the sharpness of the edge for safety.

We were unable to locate coping to match the existing polished French limestone decks, so I sourced a dense travertine which was tested for its resistance to acids and pool chemicals. The decks were later finished with the owner's supplied French limestone tiles. The difference between the finished materials is indiscernible. While dry, the glass tile blend is quite hideous. But once wet, the material's iridescence comes alive and the tiles shimmer like scales on a rainbow trout.

The brown granite was chosen because it contained speckles of the same color as the marble coping. I like to use polished granite on all of my flooded edges. Though set with the precision of water levels, any areas that are slightly high can be polished so they are exactly level. Glazed or glass tiles cannot easily be detailed in this fashion without showing signs of being "worked."

One end of the gutter for the spa return to the pool is shown (note how the end of the gutter is finished where the bather can peer in. Beyond that, it's waterproofed and finished with color-tinted thinset). Though is appears that the spa overflows into the vanishing edge basin, the water is actually captured and returned to the pool. If the spa were allowed to overflow into the basin in the normal filtration mode, the catch basin would quickly overflow and erode the hillside below. This is known among Genesis 3 as the "DiCaprio Effect" (the pool builder who built the actor's vanishing edge pool made this neophyte mistake).

This is the "mud box" for the spaside remote. The remote controls will be housed inside of this recessed area. A drain vacates any collected water to a shallow posthole filled with gravel below the spa. The amount of water is so minuscule, it is not a concern.

The skimmer lids were fabricated out of pieces of limestone to eliminate visual distraction from the scene. For the same reason, the laminar fountains also were concealed under limestone lids.

To conceal the floor returns, the adjustable heads were recessed in a bevel within the shotcrete. A pebble top drain grate was then mounted over each floor return to conceal their presence.

The space between the existing stairs and the pool was so tight that pitching the decks towards drains was virtually impossible. Instead, a "slot drain" was incorporated along each side of the pool. The drain is outfitted with a cleanout at each end. Its presence is virtually undetectable.

Architecture of the home

Originally, the landscape architect's plan was for a sweeping radius vanishing edge pool. In the initial meeting, I sat quietly and listened to his motivation for the design (those that know me know how hard that was). When the owners inquired as to what I thought, I asked them to show me any curves in the house. The only ones they could find were in the toilets and drains on the sinks and showers.

I proposed that the pool be a series of straight lines that mimicked the lines of the roof with the vanishing edge stepped to echo the house even more effectively. The various planes of water were created to carry the planes of the floor elevations seamlessly out into the yard.

Since all of the back walls were glass Nana walls, during the summer they wanted an "indoor-outdoor" free-flowing effect and feel. Additionally, the various elevations of perimeter overflowing water satisfied the need to create visual interest for the multiple vantage points.